Most of us remember the movie City Slickers. It is a great movie about some restless middle age guys from the city who find themselves on a cattle drive in the great Southwest. The defining moment in the movie plays out between Curly (the old cowboy/sage) and Mitch (the lovable bumbling “city slicker”) After Mitch complains about his marriage and life in general, Curly asks the question… Curly: Do you know what the secret of life is? [holds up one finger] Curly: This. Mitch: Your finger? Curly: One thing. Just one thing. You stick to that and the rest don’t mean anything* (edit). Mitch: But, what is the “one thing?” Curly: [smiles] That’s what *you* have to find out. WELL, at the risk of sounding like a simpleton…here…I believe…it is that “ONE THING”: Drumroll please……. (wait for it…..) A HUSBAND SHOULD “SET HIS WIFE APART”! HUH? That’s it? Yep…THAT’S IT! I am convinced that the key to a good marriage starts with the HUSBAND SETTING HIS WIFE APART as UNIQUE AMONG EVERY OTHER WOMAN ON THE PLANET! Practical ways to “set her apart”…

Eph 5:25. Husbands, love your wives, just as Christ loved the church and gave himself up for her”
2 Comments

Posted by Hixon and Margie Frank on March 15, 2011 in Devotional Thoughts, Family, Leadership 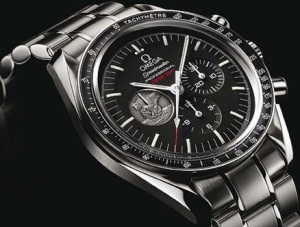 My father owned an Omega wristwatch. It was the only watch I remember him wearing. Several years after he died (1980) it was stolen from our house never to be recovered. Since then, I have become a big fan of the Omega watch but never really pursued owning one because they are quite expensive. (think baby Rolex)

Quick note: The Omega Speedmaster was the only watch issued to the astronauts back in the late 60’s early 70’s. (Durability, precision etc.)

A couple of years back I told the rather lengthy story of the Omega Speedmaster “Automatic” to Bible Study of about 70 people. (How it was the only watch tested that proved worthy of spaceflight etc…. typical illustration stuff)

About a week later I went to my mailbox at church and found a small box with a note that said, “To Hixon Frank, Thanks.” No signature, no markings, just those words. Inside the box was an “Anniversary Edition Omega Speedmaster Automatic”.

I rarely took it off so like most watches that are under constant “wear and tear”, it got a little “beaten up”. Eventually I took it to a jeweler for a new battery and general cleanup. (every other watch I ever owned went to Wal-Mart for a new battery but not this one) The jeweler replaced the battery and went on to explain to me that it was a very good REPLICA of a real Omega Speedmaster Automatic. “REPLICA!” I said, unable to hold my surprise, “you mean it’s a FAKE?”, “Yes sir”, came the timid response, “But it is a GOOD FAKE”, look right here…”

My head was spinning as I quietly put the watch back in the bag, paid for the repairs and walked slowly out……

WOW! After a few days I was able to chuckle and appreciate the gift for what it was…a kind gesture. To this day I do not know who gave me the watch but I am sincerely grateful.

Philippians 2:20-22. I have no one else like him, who will show genuine concern for your welfare. 21 For everyone looks out for their own interests, not those of Jesus Christ. 22 But you know that Timothy has proved himself

Posted by Hixon and Margie Frank on March 15, 2011 in Devotional Thoughts